Hito Steyerl. I will survive

The Centre Pompidou and the K21 Düsseldorf are collaborating on a shared exhibition, the first of its size to be devoted to Hito Steyerl in France and in Germany. A retrospective selection of the artist's major pieces is articulated around a new production and accompanied by two publications.

Through her view, Hito Steyerl's project comes to grips with one of today's essential issues in terms of the changes encountered by museums. Its point of departure is the architecture of the Centre Pompidou: a transparent and functional layout inaugurated more than forty years ago to sustain the heritage missions of the museum with the democratic project of a cultural resource centre that is open to all.

With her unique language combining satire and criticism, the work of German artist Hito Steyerl has acquired considerable international recognition in recent years. Resulting from a very personal view of documentary film, this work has developed since the beginning of the 2010s in the form of immersive videos and multimedia installations, combined with a spirit of research and experimentation. Although Hito Steyerl uses the latest technologies, it is in order to question their power to influence the public and her capacity to refashion in a subterranean manner that which passes for "real".

Her already famous works such as How not to be seen (2013) or Factory of the Sun (2015), deliver up an irresistible satire of the excesses of global surveillance and the reduction of the world to a datacentre in the hands of the highest bidder. Attentive to the future of State institutions, Hito Steyerl tackles from more than one point of view the growing action of multinationals in the whole social sphere and the public arena.

Hito Steyerl was born in Munich in 1966, studied at the Japan Institute of the Moving Image (formerly the Yokohama Broadcasting Technical School, founded in 1975 by Shohei Imamura), then at Munich University of Television and Film before presenting a thesis in philosophy at Vienna Academy of Fine Arts.

She lives in Berlin, where she teaches New Media Art at Berlin University of the Arts, and founded the Research Center for Proxy Politics (with Vera Tollmann and Boaz Levin). Her work has been the subject of several monographic exhibitions and has been included in many international events, such as the 58th Venice Biennale (2019). *

In 2017 she was ranked in the first position in the Power 100 list of "the most powerful personalities of the art world" by ArtReview, before being announced winner of the Käthe Kollwitz Preis 2018. The National Museum of Modern Art preserves two works by Hito Steyerl: the multimedia installation Red Alert, 2007, and the video In free fall, 2010. 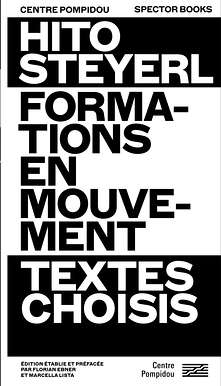