‘My images belong to you.’ With workers' strikes, anti-imperialist struggles

keen sense of History, the woman who liked to call herself a "public writer" or

a "ferryman" ceaselessly gave a voice to those who had none, and expressed an

analytical criticism of the media. A pioneer of the light video, Carole

Roussopoulos filmed and edited some 150 documentaries. Her considerable body of

Switzerland, the Bibliothèque Nationale de France, and the collections of

Showing presented by Hélène Fleckinger, President of the Carole Roussopoulos

Association, as part of the Labex H2H "Cinema, video and politics in France

since 1968", in partnership with Paris 8 University. 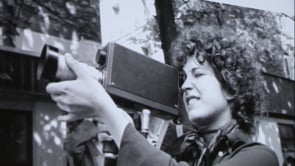