Explore the mystery of sandcastles! During the holidays, generation after generation, thousands of small family tribes give themselves over to this activity on the beach. A long way from the backwash of the waves, the Centre Pompidou invites writer Jean-Yves Jouannais to create an exhibition-workshop to explore this universal ritual. Parents and children, like so many architects, create drawings and plans for their constructions. Then it's time to start working… in sand! And an ephemeral, poetic town rises up, reflecting each person's imagination and creativity.

"When you build a sand castle, you are its defenders, but you are also the ocean. You imagine you are the tide. We fight, but not against it. It is for the tide that we have built this dam, in fact. We have made it a gift. Or rather, it is as though we have given it something to devour."

"Yes, I see – just like at the zoo when you give food to an animal you're a bit afraid of."

"Yes, that's it. You know perfectly well that you can't stop the ocean. The fortifications are there not to stop the sea so much as to slow it down, and make it hesitate. We played at making the waves hesitate."

"But it was a victory, because at heart – you didn't know it, perhaps – what we really wanted was to lose. We got what we wanted – the destruction of our dam."

Imagine a firm of architects on the beach. Alongside Dale Murdock, the world sandcastle champion, you are going to design and build a town. And this dream city is unrivalled. It is a concentrate of the most beautiful cities that have ever existed, now or in the past, from Babylon to Venice, and the ones you find in science-fiction novels or films. You design and plan your project: a skyscraper, a water tower, a railway station, a museum, a swimming pool, a monument, and so on. It's up to you. You then enter the worksite itself. With sand, buckets, spades and trowels, you have all the tools and instruments of your trade as a builder of sand cities. Anything goes. Reality mingles with fantasy. The history of utopian architecture blends with the story of your dreams. Little Nemo soars above the inventions of Archigram; Renzo Piano meets Picassiette; Romanesque churches combine with the towers of La Défense. Some of your sandy creations are used by Dale Murdock to enlarge his huge city in the form of an island hanging in the air. This city of sand looks even more like an extraordinary castle built on the seashore, which the tide slowly pulls out to sea rather than destroying it. Yes, this is what you are going to create: a magical city which turns into a travelling island carried along by the waves. 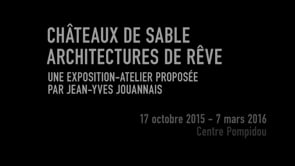 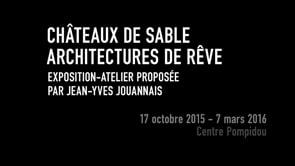