The Centre Pompidou is staging “Work/Travail/Arbeid”, a choreographical exhibition by Anne Teresa De Keersmaeker, adapted from Vortex Temporum, her dance piece to the music of the same title by composer Gérard Grisey. De Keersmaeker isn’t just bringing ballet to a new space, but recasting dance in the form of a nine-day exhibition in which she explores the relationship between music and dance, inviting us to “see” the movement when we only have the sound to go on, to grasp the music when only the dance is seen.

Bernard Blistène – What does it mean for you, to make an exhibition of dance? How did the idea come to you?
Anne Teresa De Keersmaeker – The suggestion was made to me when I was working on Vortex Temporum. The performance is designed in strata, on several levels, with a gradual accumulation of elements. That’s what inspired the stratified conception of time of the exhibition. I didn’t want to transfer theatre habits to a museum gallery. On the contrary, I was attracted to the opposite idea: taking ones time, extending the choreographic process over a much longer time. A performance pulls together all its layers. The exhibition isolates them, one by one and then suggests the infinity of possible combinations.

BB – How did you construct the argument of the piece?
ATDK – The starting point was the structure of Vortex Temporum, whose elements were then deconstructed, the voices separated. Rather than working with seven choral voices together, the little visual and musical units are considered independently, then by two, by threes, by fours and so on. Basically, it’s as if the composition of a performance were revealed stage by stage, not in didactic fashion but as they happen. The result is a nine-hour cycle whose length does not coincide with the opening time of the museum, ten hours a day.

BB – How do you see the relationship between dance and the visual arts today?
ATDK – I don’t believe that all art is political, but I do think that Genet was right when he said that the artist puts into question the way things are, which implies an anarchy of sorts. We find the world of today disorienting in its complexity and multiplicity. There’s no centre any longer; there’s nothing left but the consumption of things. Confronted with this, my anarchism involves cultivating a certain simplicity, an inertia, a slowness, so as to achieve intensity without the spectacular. It’s a modest attempt to create a new framework on the basis of which it might be possible to look at things in a new way. Dance can bring something quite new to the idea of the exhibition: a shared experience of a new sense of the present moment. And that’s not a theatrical moment, in the black box; more fluid and less impatient, the space-time of the museum, of the white cube, exposes us to the uncontrollable. It can thus happen that a moment is lived as an unexpected experience of the collective.

In collaboration with Opéra de Paris

Fase, Four Mouvements to the Music … 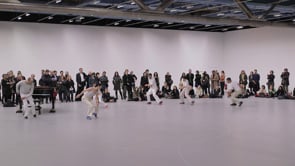