Gérard Fromanger’s name evokes a host of motifs, people and events that together conjure up half a century of artistic, cultural and social life: his friendship with Jacques Prévert, May 68, red silhouettes, pedestrians on the city streets, the play of colours, a legendary agitational short made with Jean-Luc Godard, texts by Gilles Deleuze, Michel Foucault and Félix Guattari, Figuration Narrative, painting and politics.

While such associations serve to recreate the environment and the atmosphere within which Fromanger made his name as an artist in the 1970s, they are inadequate to characterize an artistic project which, despite the frequent transformations of his work, has remained consistent through half a century: a painting open to the world while never forgetting its own status as painting. Ranging from 1964 to 2015, this exhibition of some fifty works, some rarely seen, seeks to trace the changing expressions of this single project.

Michel Gauthier – From your early days and your joining Galerie Maeght in 1964, then the biggest gallery in the world, until today, would you say there has been a constant in your work?
Gérard Fromanger – There are several constants in my work, “from my early days and my joining Galerie Maeght, the biggest in the world”. Between the art market and the history of art, I have always opted for the history. From “the biggest gallery in the world” to the most modest, the most important activity for any gallery, an absolute necessity, it to find a place in the market. The first constant is my fidelity to the territory of history and risk. Fascination with and interrogation of the image is another. No doubt in opposition to the triumphant abstraction of the generation before mine, but above all from admiration for the lineage that runs from Giotto to Picasso and Giacometti via Cézanne, and from Marcel Duchamp to Bruce Nauman – and the hope of making my own small contribution to the endless quest. The third constant is colour. After a short engagement with the infinite tonality between black and white, I quickly adopted the colour spectrum as my alphabet. The rainbow has always come to my aid, both in times of doubt and in times of conviction. Light and dark colours, primary and complementary colours and their intensities have been the basis of my work, the ever-present code and vocabulary.

MG – What role was played in the development of your work by the events of May 68, and by your encounters with some of the great intellectuals of that time?
GF – How do you translate into the joys of painting the joys of a great collective festival like May 68, if not by a language of colour capable of endowing the image with freshness, newness, delight? May 68 confirmed, enriched and underlined the necessity of my colour code. When May 68 declared that “energy is us”, I found the strength to paint the energy of the world. When the philosophers (Sartre, Deleuze, Foucault, Guattari, Lyotard…) or the poets (Jouffroy, Bulteau or Bailly) talked to me of the “energy of the world”, they made me want to speak to them in paint, and it’s through this exchange of languages that friendships were formed.

MG – The pedestrian passing by is a motif found throughout your work. How should we understand it?
GF – Yes, the motif of the passer by is there right through my work, another constant. Pedestrians in the city streets. I go out of my home, where much is familiar, and go into the street, where everything is mobile and enigmatic. The extraordinary banality of the passer by in the street is an extremely powerful “horizon of expectation”. Here the empty image of the spectacle can be filled with all the colours of life.

MG – Are you a Pop painter?
GF – If the question is, “Are you Pop?”, as if one asked “Are you Cubist, Surrealist, Dadaist?”, my answer is no. In France, only a few artists who knew London or New York between 1958 and 1965 can claim that affiliation. On the other hand, I certainly situate myself in the worldwide cultural movement that broke with the ideological and aesthetic universe of the pre-1960s.

"Le scénario Fromanger !" (The Fromanger scenario!) workshop » - For children aged 6 to 10 with thei…

"Le charivari Fromanger !" (The Fromanger hullabaloo!) workshop » - For children aged 2 to 5 with th… 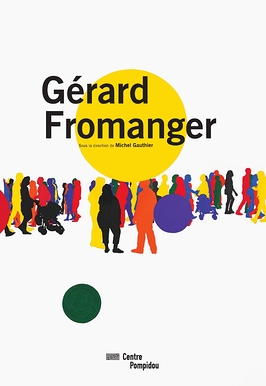