Considered to be one of the most important abstract painters of the second half of the 20th century, Martin Barré is the subject of a major retrospective in the Centre Pompidou. This exhibition follows on from those devoted to the abstract artists Pierre Soulages, Simon Hantaï, Jesus Rafaël Soto, François Morellet and, recently, Ellsworth Kelly.

Martin Barré's work is radical, among the most ambitious of his time. The last major Paris exhibition devoted to the painter (1924 – 1993) was that at the Jeu de Paume in 1993, which focussed essentially on his production during the 1980s. It followed on from exhibitions in museums in Nantes, his birthplace, in 1989, and in the Musée d'Art Moderne de la Ville de Paris in 1979.

The exhibition, which brings together sixty-six paintings ranging from 1955 to 1992, twelve of which come from the twenty canvases figuring in the collections of the Centre Pompidou, presents the main sequences in his work and their specific logic. At the same time, the work entitled L'Indissociable (1977-1978), consisting of fourteen canvases, is shown in the collection spaces on Level 4 of the Museum. It has been shown only once, during the exhibition at the Musée d’Art Moderne de la Ville de Paris.

Beginning in the mid-1950s, Martin Barré opened up a unique path of abstraction that was neither informal nor geometrical. His painting was quickly observed to be one of the most ambitious of the time, seeking more to reveal space rather than to produce forms. The Guggenheim Museum included him in its collection as early as 1958. In 1960 he made lines the central idiom of his expression. Initially traced directly on the canvas from a tube, then with a spray can after 1963 until 1967, lines have a dual virtue. Much better than shapes, they refer back to the gesture that produced them, whether the movement of the artist or the force with which the paint comes from the tube or the spray. Unlike shapes, lines do not occupy the surface of the painting but transform it into a space under the effect of the trajectory they trace on it.

After an interruption of four years, spent in a "photo-conceptual episode", Martin Barré resumed painting in 1972. Up until 1977 he made five series that reversed the reductionist trend of the 1960s. All the series were in fact elaborated in accordance with the same method:

1. On a white background, a fragment of a grid traced obliquely;

2. Hatching (or marking by another means) in some or all of the boxes in the grid;

3. Application of a more or less white veil.

And the sequence can recommence several times, with the grid changing position or not, the hatching filling different or the same boxes and, in this case, with an identical or different slant, before the application of a new veil. A system begins to appear (lines, continuous or dotted, strokes, transparent veils). However, despite its revelation, all signs of control are avoided. The work is serial, not in order to assert the power of the system but in order to stress its infinite character, the impossibility of completing the programme it introduces.

In the 1980s, figures, which the predominance of lines had eliminated during the 1960s and which were only a collateral effect of the system in the series from the 1970s, returned to the foreground. With figures, colour also came to be asserted, first of all in the 80-81 series with subtle Pompeiian colours, then in the final series where figures and colours were identified with each other on slightly coloured whites. During this period, Martin Barré's painting followed the pathways of geometric abstraction and reinstalled the traditional figure / background rapport which it had always made a point of avoiding, without however generating an illusion of depth in the pictorial field. These paintings are presented for immediate appreciation and afford a pure experience of beauty.

In media partnership with Paris Première and FIP 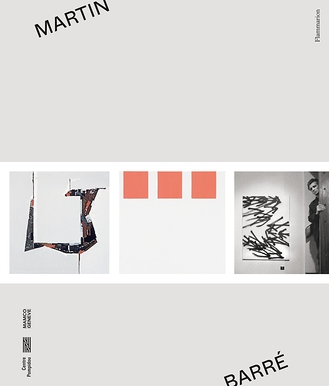